Over the past ten months, Ky Wandara’s life has, by his own account, been hell. As the former treasurer of the opposition Cambodia National Rescue Party (CNRP) for 20 years he had fought to bring the dictatorial three-decade rule of prime minister Hun Sen to an end.

But in October, just weeks after Hun Sen began a crackdown which saw the CNRP leader, Kem Sokha, arrested for treason and the eventual dissolution of the party altogether, Ky Wandara was forced to flee to Thailand, along with over 100 CNRP members.

He has no hope of returning home. The crackdown in Cambodia has intensified and in Sunday’s election, Hun Sen has no legitimate challengers. While over 20 parties will run in the election, they are either considered to be bogus (candidates include an ex-warlord and a woman who claims that spirits came to her in a dream and instructed her to run) or puppets for Hun Sen.

Even though the CNRP’s key figures have been exiled, the party’s leader, Sam Rainsy, who lives in Paris, and deputy CNRP president Mu Sochua, who is in Berlin, have led calls for voters to boycott the election as the only way to undermine Hun Sen’s inevitable victory. Hun Sen retaliated, calling the boycott “illegal”.

Most CNRP exiles remain in Thailand, but such are the reaches of Hun Sen, they all still live in secret, many moving location every few days to ensure they are not found and handed back to Cambodia. According to Ky Wandara, CNRP exiles were warned by those still in Cambodia that the authorities had sent 400 agents over the border to track them down and monitor their movements in Thailand.

“It is scary and lonely,” Ky Wandara says. Having managed to get political asylum in New Zealand in January, he is one of the only exiles who has felt free to describe his ordeal without fear of compromising his safety. There are still over 100 living under the radar in Thailand.

“You have to move around to new accommodation every week for security, and we are alone because if we stay together you can be traced more easily,” he said. “Everyone is scared that the Thai authorities or Hun Sen’s spies will find them and force them back to Cambodia.”

Ky Wandara knew he would have to flee the country the moment he saw his name on the government list of 118 figures banned from politics last September.

“My wife told me recently that her car window was smashed and my driver just told me that the police had been following him because they thought I might still be in Cambodia. And for my colleagues in Battambang, whenever they go out from their homes, the police follow them.”

For those who did escape, much of their fear is rooted in a rumoured deal between the Cambodian and Thai authorities in which the two countries are thought to have agreed to send back wanted dissidents. Last year Hun Sen called on Thai authorities to “chase” CNRP exiles living in Bangkok and several of the dissidents have since been visited by the Thai police.

Their worst fears were confirmed in February when the Thai authorities sent back Sam Sokha, a Cambodian woman who ran away to Thailand after being caught on film throwing her shoe at an image of Hun Sen, despite her being recognised as a political refugee by the United Nations.

The plight of the exiles in Thailand is just one element of a climate of fear that has gripped Cambodia in the build up to the election on Friday. With no legitimate opposition, Hun Sen’s victory is seen as a foregone conclusion. Even the election monitors have close ties to the prime minister – one is being run by his son.

“This election is a sham, a disaster,” Mu Sochua, the CNRP deputy president who also lives in exile, told the Guardian. “There is no way for voters to express themselves in this election – there is widespread intimidation and threats – and there is nothing legitimate about this election at all. We will continue to call on voters to boycott the election.” 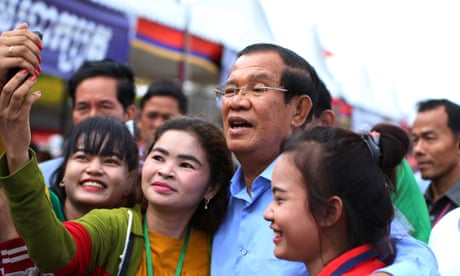 The Cambodian election body recently declared calls for boycott a “crime”, while the chief of police has said the “clean fingers campaign” – a reference to the absence of indelible ink voters use to mark their skin after casting a ballot – is “equivalent to preventing people from voting” and therefore “illegal”. Interior minister Sar Kheng said voters who took part in the boycott could face fines of up to $5000.

The Guardian spoke to numerous voters and former CNRP members who have faced intimidation and threats of imprisonment by authorities for voicing support of a boycott. A garment worker at a factory on Veng Sreng Boulevard, where post-election workers protests were violently suppressed by Cambodia’s paramilitary forces in 2014, shared a rumour she heard on the factory floor. “I heard if I do not go to vote, the factory will fire us,” she said, asking to remain anonymous.

Villagers in the former opposition stronghold of Kampong Cham have been greeted by CPP authorities going door-to-door in recent weeks, and are being told that if they don’t vote for the CPP their lives will be made difficult. One villager, who was overheard saying he would rather sleep than vote on 29 July, was threatened with prison if he repeated the sentiment.

Chak Sopheap, from the Cambodian Centre for Human Rights, said voter turnout had become an “extremely sensitive” topic for the ruling party.

“This election has become more of a referendum on the government’s legitimacy,” she said. “The pressure to vote is fierce.”

“Those calling for a boycott have repeatedly been labelled as traitors and revolutionaries by senior government officials. In rural areas, people with ‘clean fingers’ can be easily identified by local authorities and party activists from the ruling party, and many are fearful of the consequences.”

Despite those consequences, Than Sorith, a member of the CNRP working group in Kampong Cham, was still determined to abstain from voting on Sunday.

“I will not go to vote, I will boycott,” he said. “We have to do something, not just stay quiet. We must be brave.”

I am running for California’s 16th Congressional District to provide a new voice for the Central Valley.…

The Ministry of Mines and Energy has granted a mining license to Renaissance Minerals (Cambodia), a…

A new nail salon is opening up in Glendale, Arizona, and you can try it out for 40% off on regular service…

Kampot Pepper Yields Will be Down 26%

How a Vietnamese Refugee Founded a Multi-Million Dollar Sriracha Empire

Somewhere in the world, there is a Sriracha fan who has turned his beard into a bowl. It sags below…

Cambodia Should be Wary of EBA Loss