Archaeologists in Cambodia have found multiple, previously undocumented medieval cities not far from the ancient temple city of Angkor Wat, the Guardian can reveal, in groundbreaking discoveries that promise to upend key assumptions about south-east Asia’s history.

The Australian archaeologist Dr Damian Evans, whose findings will be published in the Journal of Archaeological Science on Monday, will announce that cutting-edge airborne laser scanning technology has revealed multiple cities between 900 and 1,400 years old beneath the tropical forest floor, some of which rival the size of Cambodia’s capital, Phnom Penh.

Some experts believe that the recently analysed data – captured in 2015 during the most extensive airborne study ever undertaken by an archaeological project, covering 734 sq miles (1,901 sq km) – shows that the colossal, densely populated cities would have constituted the largest empire on earth at the time of its peak in the 12th century.

Evans said: “We have entire cities discovered beneath the forest that no one knew were there – at Preah Khan of Kompong Svay and, it turns out, we uncovered only a part of Mahendraparvata on Phnom Kulen [in the 2012 survey] … this time we got the whole deal and it’s big, the size of Phnom Penh big.” 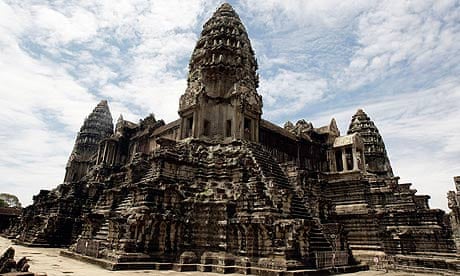 A research fellow at Siem Reap’s École Française d’Extrême-Orient (EFEO) and the architect of the Cambodian Archaeological Lidar Initiative (Cali), Evans will speak at the Royal Geographic Society in London about the findings on Monday.

Evans obtained European Research Council (ERC) funding for the project, based on the success of his first lidar (light detection and ranging) survey in Cambodia in 2012. That uncovered a complex urban landscape connecting medieval temple-cities, such as Beng Mealea and Koh Ker, to Angkor, and confirmed what archaeologists had long suspected, that there was a city beneath Mount Kulen. It was not until the results of the significantly larger 2015 survey were analysed that the size of the city was apparent.

That survey uncovered an array of discoveries, including elaborate water systems that were built hundreds of years before historians believed the technology existed. The findings are expected to challenge theories on how the Khmer empire developed, dominated the region, and declined around the 15th century, and the role of climate change and water management in that process.

“Our coverage of the post-Angkorian capitals also provides some fascinating new insights on the ‘collapse’ of Angkor,” Evans said. “There’s an idea that somehow the Thais invaded and everyone fled down south – that didn’t happen, there are no cities [revealed by the aerial survey] that they fled to. It calls into question the whole notion of an Angkorian collapse.” 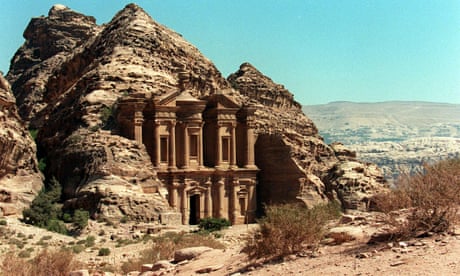 Archaeologists discover massive Petra monument that could be 2,150 years old

The new cities were found by firing lasers to the ground from a helicopter to produce extremely detailed imagery of the Earth’s surface. Evans said the airborne laser scanners had also identified large numbers of mysterious geometric patterns formed from earthen embankments, which could have been gardens.

Michael Coe, emeritus professor of anthropology at Yale University and one of the world’s pre-eminent archaeologists, specialises in Angkor and the Khmer civilisation.

“I think that these airborne laser discoveries mark the greatest advance in the past 50 or even 100 years of our knowledge of Angkorian civilisation,” he said from Long Island in the US.

“I saw Angkor for the first time in 1954, when I wondered at the magnificent temples, but there was nothing to tell us who had lived in the city, where they had lived, and how such an amazing culture was supported. To a visitor, Angkor was nothing but temples and rice paddies.”

Charles Higham, research professor at the University of Otago in Dunedin, New Zealand, and the leading archaeologist of mainland south-east Asia, said it was the most exciting paper he could recall reading.

“I have been to all the sites described and at a stroke, they spring into life … it is as if a bright light has been switched on to illuminate the previous dark veil that covered these great sites,” Higham said. “Personally, it is wonderful to be alive as these new discoveries are being made. Emotionally, I am stunned. Intellectually, I am stimulated.”

David Chandler, emeritus professor at Monash University in Melbourne, Australia, the foremost expert on Cambodian history and the author of several books and articles on the subject, said the work was thrilling and credited Evans and his colleagues with “rewriting history”.

Chandler said he believed it would open up a series of perspectives that would help people know more about Angkorian civilisation, and how it flourished and eventually collapsed.

“It will take time for their game-changing findings to drift into guide books, tour guides, and published histories,” Chandler said. “But their success at putting hundreds of nameless, ordinary, Khmer-speaking people back into Cambodia’s past is a giant step for anyone trying to deal with Cambodian history.”

David Kyle, an archaeologist and ecological anthropologist has conducted projects at Phnom Kulen, the location of the biggest findings, the massive city of Mahendraparvata, the size of Phnom Penh, beneath the forest floor.

He said the “survey results have revolutionised our understanding and approaches. It’s impossible not to be excited. It facilitates a paradigm shift in our comprehension of the complexity, size and the questions we can address.”

While the 2012 survey identified a sprawling, highly urbanised landscape at Greater Angkor, including rather “spectacularly” in the “downtown” area of the temple-city of Angkor Wat, the 2015 project has revealed a similar pattern of equally intense urbanism at remote archaeological ruins, including pre- and post-Angkorian sites.

How Chinese money is changing Sihanoukville – ‘No Cambodia left’

“I been given such a warm welcome in Lowell!” said Vichet Chum, the writer and actor of “Knyum,”…

The movie, “In the Life of Music”, which features the Sisamouth classic “Champa Battambang”,…

Cambodia’s government on Tuesday defended its decision to hire a U.S. state lawmaker to lobby on behalf…

The Chinese embassy in Cambodia is investigating a video of a gang, supposedly from Chongqing, threatening…

10 Steps to Naturalization: Understanding the Process of Becoming a U.S. Citizen

To apply for naturalization, you will need to file Form N-400, Application for Naturalization. Below…

Cambodia dismayed over US sanctions for corruption, logging